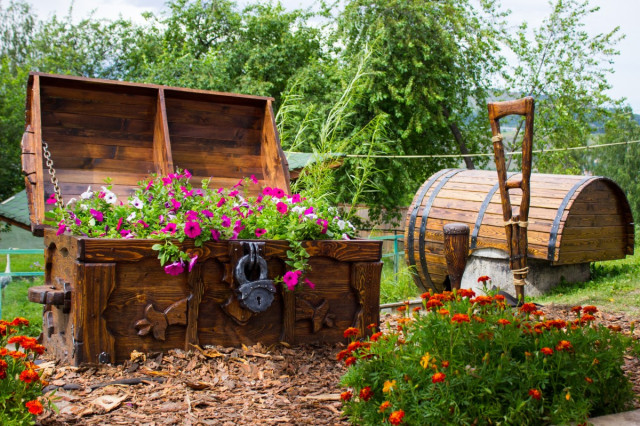 Ayls and Jimmy Main continued to walk past Mr Marsden’s place on their way to and from school remarking on the healthy state of his garden and admiring the seemingly never-ending array of colours from the multitude of plants he had on display.

Mr Marsden was a little concerned over the willingness he showed in allowing the two children into his place even though his spell to make them forget what they saw worked he wondered if he was becoming soft in his old age and that could lead to mistakes and discovery.

He had been a wizard for a long time. It had been a family tradition, and his father had taught him well, and he liked the life style it afforded him. Mostly as he was now retired, he dabbled in horticulture or at least his version of it.

He loved mixing his potions and seeing what effect they had on the plants which for the most part were orderly and well behaved. It was the reason he bought the container to store his chemicals and to practice with his potions away from any prying eyes.

He found the singing peonies a delight to be around, but their raucous singing meant they had to be confined to the container. The roses that changed colour was another he loved to watch, and he had used the same process on his hydrangeas he had growing along the front of his house. They had grown to a grand size, and he loved watching them turn from blue to pink to white to mauve.

To protect himself from the outside world, he had cast a potion all-round the house so that anyone looking in saw only one colour and so the fact that yesterday they might have been blue and today pink didn’t register as unusual.

In an old dusty bottle, he found an old love potion he had once peddled to lonely couples that he decided he might use as fertilizer on a batch of geraniums he had grown in a few old pots. The effect was amazing, and he giggled to himself every time he walked past them.

The geraniums usually sedate and reserved had become flirtatious and would wolf-whistle and make the most provocative suggestions whenever he walked by. These he decided as funny as they sounded, had to be locked into the container as he doubted his neighbours nor their children would appreciate the geranium’s lurid attention.

Mr Marsden liked the way he had set things up after all the aim of everything was to please himself. It didn’t matter to him what people thought as he’d reached the end of his working life and now he was putting to use the skills he had learned over the years.

He was out in his front garden one Friday morning tending to his hydrangeas when Ayls and Jimmy wandered by. They both stopped to check over Mr Marsden’s garden which was its usual colourful self. They nodded to Mr Marsden who nodded back in the same way he did each time they past.

Ayls was particularly interested in the hydrangea’s and remarked to Jimmy that she was sure yesterday the plant was awash with blue flowers. Jimmy scoffed and said she was being silly and that the flowers were always pink and that they had best be on their way or they’d be late.

As they headed off, Ayls called to Mr Marsden, “I liked the blue, Mr Marsden, can you keep them blue?”