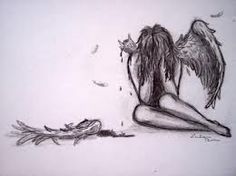 Mary found herself sitting on the grass verge beside the road. She wasn’t sure how she got there but there was a sharp pain in her shoulder.

She shook her head and noticed the Number 184 bus disappearing into the gloom of the day.

It was then she remembered hovering above a man digging a hole when everything went haywire. The bus as it ruined the corner must have clipped her and sent her onto the grass.

Fairies have a natural urge to fly, but the pain in her shoulder told her she had a broken wing.

Thank goodness for health insurance she thought to herself and then wondered of all things why that thought came to mind. Her mother had insisted from the day she started flying that she get health insurance. Flitting here and there can be dangerous as Fairies flit at speeds the human eye cannot detect. Today though it was her hovering that resulted in her present problem.

Unable to fly she had to walk home and as walking wasn’t something she did a lot of it was a slow and arduous trek home.

As she trudged along she knew she was going to have to go and see Mother Drake, the Fairy Wing repairer. Mother Drake was excellent at repairing broken wings, an occupational hazard for every fairy.

As Mary expected Mother Drake was full of value judgements, she was going too fast, not paying attention, too young and too carefree, the list went on and on.

Mary suffered it all as Mother Drake went about applying the necessary ointment and splint to hold the broken wing in place. Mary would be confined to home for the next week or so as the healing took place.

This would be her first stint as a patient and she wasn’t looking forward to it, as she liked to be out and about. But right now the long walk home had worn her out and so with instructions from Mother Drake sounding in her ears she made it home and settled herself into her bed.

She awoke with the most excruciating pain. Her wing joint seemed to be on fire. She looked about for the painkillers Mother Drake had given her and swallowed several.

Whatever was in the tablets worked almost immediately and Mary felt herself floating off into a deep slumber.

Next thing she knew Mother Drake was standing over her going on about the younger generation unable to follow the simplest instructions. Mary had taken a few too many painkillers and a week had passed during which Mary’s housemate, Agnes Thistle, had raised the alarm.

The good side to all that was Mary’s broken wing was repairing well and once Mary had had a strong cup of Fairy Tea she was soon feeling her usual self, her broken wing now capable of the odd flutter or two.

Mary’s well being was a relief to everyone, especially to Mother Drake who on her departure left Mary with a sizeable bill for the week she had put in watching over her.

Thank goodness for health insurance thought Mary as she looked at the bill, twice.